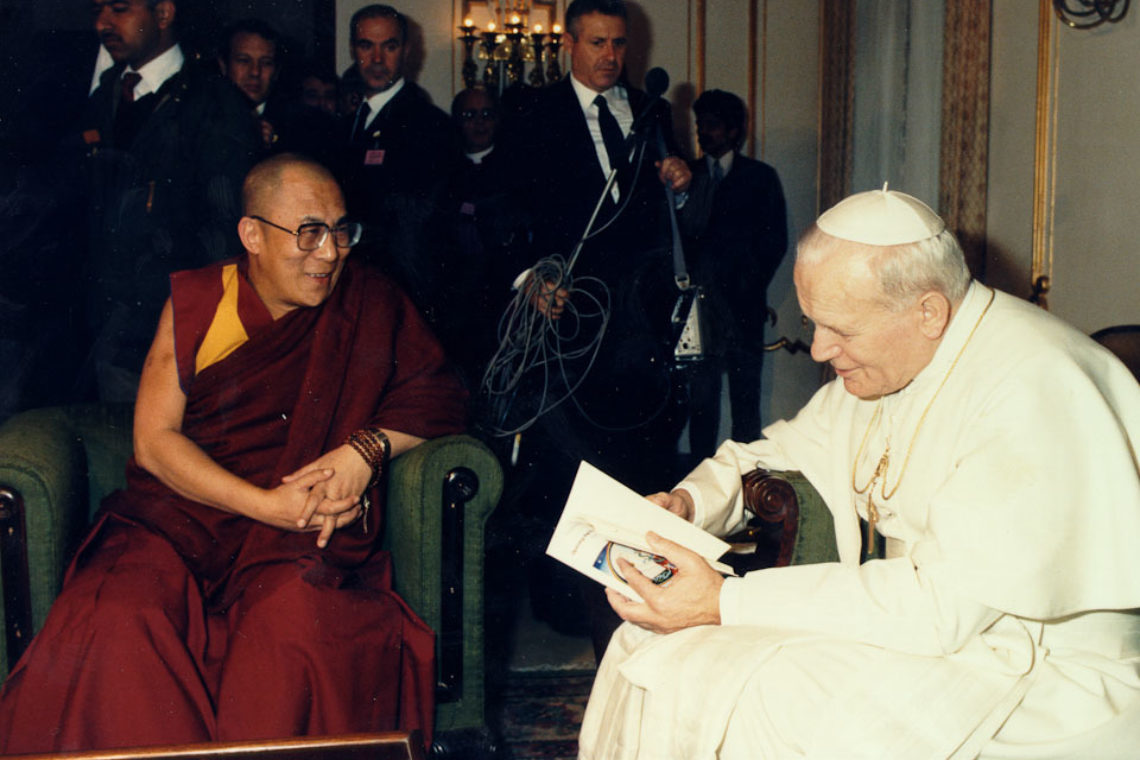 When the Dalai Lama Accepted the 1989 Nobel Peace Prize for his work on global human rights — particularly for his ceaseless efforts to free his country from Chinese rule — he referred to himself as “a simple monk from Tibet.” But His Holiness is also the spiritual and political leader of 6 million Tibetans, who believe him to be the 14th earthly incarnation of the heavenly deity of compassion and mercy. Like his 13 predecessors, he works for the regeneration and continuation of the Tibetan Vajrayana branch of Buddhist tradition.

Born in 1935, Tenzin Gyatso was recognized at the age of 2 as the reincarnation of the Dalai Lama, and by age 19 he was negotiating with China’s Mao Tse-tung over the future of Tibet, which China invaded in 1950 and has occupied ever since. After years of failed peace talks and a violent suppression of Tibet’s resistance movement in which tens of thousands of Tibetans died, the Dalai Lama fled in 1959 to Dharamsala, India, where he continues to be the spiritual leader of Tibet’s people and heads Tibet’s government-in-exile.

The following conversation took place at His Holiness the Dalai Lama’s home in Dharamsala in August.

Robert Thurman: Is there something about America that makes so many people seek out and practice Buddhism?

His Holiness the Dalai Lama: I don’t know. Why are you so interested? [Laughs] No, seriously, I feel that Americans are interested because they are open-minded. They have an education system that teaches them to find out for themselves why things are the way they are. Open-minded people tend to be interested in Buddhism because Buddha urged people to investigate things — he didn’t just command them to believe.

Also, your education tends to develop the brain while it neglects the heart, so you have a longing for teachings that develop and strengthen the good heart. Christianity also has wonderful teachings for this, but you don’t know them well enough, so you take interest in Buddhism! [Laughs] Perhaps our teachings seem less religious and more technical, like psychology, so they are easier for secular people to use.

Thurman: Some people say that you have to follow the religions of your own culture. Is it really a good idea to adopt a religion or spiritual practice foreign to one’s culture?

Dalai Lama: I always say that people should not rush to change religions. There is real value in finding the spiritual resources you need in your home religion. Even secular humanism has great spiritual resources; it is almost like a religion to me. All religions try to benefit people, with the same basic message of the need for love and compassion, for justice and honesty, for contentment. So merely changing formal religious affiliations will often not help much. On the other hand, in pluralistic, democratic societies, there is the freedom to adopt the religion of your choice. This is good. This lets curious people like you run around on the loose! [Laughs]

Thurman: Your Holiness has said that in the future, when Tibet is free, you would cease to be the head of the government of Tibet. Is this because you would like to introduce the democratic principle of the separation of church and state to your nation?

Dalai Lama: I firmly believe democratic institutions are necessary and very important, and if I remained at the head of government, it could be an obstacle to democratic practice. Also, if I were to remain, then I would have to join one of the parties. If the Dalai Lama joins one party, then that makes it hard for the system to work.

Up to now my involvement in the Tibetan freedom struggle has been part of my spiritual practice, because the issues of the survival of the Buddha Teaching and the freedom of Tibet are very much related. In this particular struggle, there is no problem with many monks and nuns, including myself, joining. But when it comes to democratic political parties, I prefer that monks and nuns not join them — in order to ensure proper democratic practice. The Dalai Lama should not be partisan either, should remain above.

Excerpted from “The Dalai Lama on China, Hatred, and Optimism: A conversation with Robert AF Thurman” which originally appeared in the 1997 November/December Issue of Mother Jones. To read the entire article please visit: www.motherjones.